What does the German Center for Robotics in Tuzla – DKR bring to Bosnia and Herzegovina? 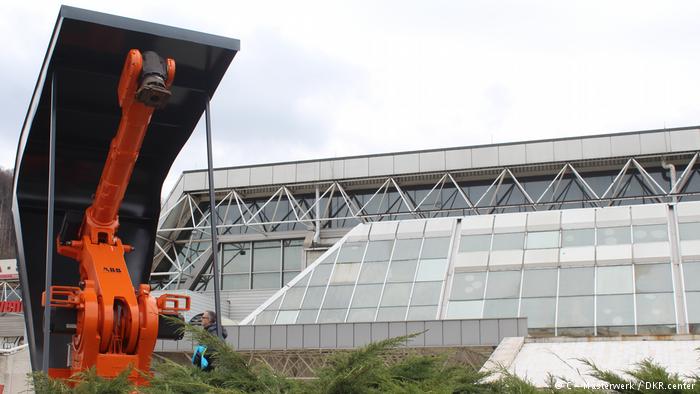 DW: Mister Babajić, why did you decide to invest in Bosnia and Herzegovina in a moment when at this point a lot of its citizen decided to turn their back on the country?

Muamer Babajić:I see in Bosnia and Herzegovina perspective and chances that are not obvious. My goal is to improve the condition we live in, because if we don’t do it, who will? Since the start of the war, 25 years have passed, and I think that it is time to start changing things. It is not just enough to talk about it that something has to be done. Bosnia and Herzegovina has capable people. Especially younger people. It would be a shame if they did not have perspective. The thing that is most important for me is that we have to be honest. We have to stop talking about how we are the best and rather start working on ourselves so we can be the person we want to be. However, I have to admit that Bosnia and Herzegovina, regarding technics and technical development, is lagging behind. To follow world flows and so that the citizen of Bosnia and Herzegovina and its region don’t just be cheap manpower, high technologies are needed.

DW: What is the vision of the German Center for Robotics (DKR) which will be used for educations (trainings)?

Muamer Babajić: Our Vision is to open perspectives and import technologies like in Germany and other developed countries. That means that Bosnia and Hercegovina and its citizens have the opportunity to live from their job so they don’t need to go abroad for work. Of course that will need some time, but we have to remember that even the longest journeys start with a first step. Talking about import, it is primarily regarded about the know-how besides special equipment. Talking about education, this year we will give free courses for robot programming and soft skills training, which is mandatory for a positive development. I have developed the Soft skills training together with a top trainer who works on 4 continents for the biggest companies in the world like Google, Allianz, Lanxess etc. The trainers have a doctoral degree and work on topics like communication, motivation and other topics that are connected to the skills we need. University student and Highschool absolvents will be taught. More about that later, after the opening of the Center. Talking about the teachers, we have chosen the best cadre who already teach at the Faculty for mechanical engineering in Tuzla and The Electrical engineering Highschool in Tuzla. Additionally, the employees of Masterwerk who have practical knowledge will teach.

Muamer Babajić is the owner of the company Masterwerk which deals with design and construction of parts for automotive and machine industry as well as robotics.

DW: What will the Center for Robotics offer the common citizen of Bosnia and Herzegovina? What is their benefit of it?

Muamer Babajić: The common citizens of Bosnia and Herzegovina will indirectly and in a long term benefit from the center. For example, abroad investors want to invest in Bosnia, but he needs automatization. Automatization with industrial robots is growing in the west and a growth in Bosnia is expected in the following years. It is commonly known that serial production cannot be achieved unless automatized robot systems are being used. If abroad investors lack this and if they have to buy and service these machines in another country and if they have a complicated bureaucracy, like Bosnia and Herzegovina has, then they decide to go to different countries like Hungary or Romania. Therefore, we have to set the conditions for abroad investors to come to Bosnia. The common citizens then benefit from the newly opened working places which will raise the living standard because of the higher production.

DW: Does that mean that Bosnian entrepreneurs will no longer need to import robots from Germany and that their servicing will be cheaper?

Muamer Babajić: Exactly. They will no longer need to worry their robots, how they will be programmed and what will happen if he stops working. One entrepreneur, after I presented him about the idea of the Center, told me that he hopes that it is opened as fast as possible. Why did he ask me that? Because a technician from a technically developed county had to come, program, start the robot and service him. That service costed him thousands of euros. We want that Bosnian entrepreneur
lose their fear of it, because automatization with robots is still not present on our territory. With a “know-how” transfer we already have local people that know the topic and we reduce costs of servicing. This way, entrepreneurs have it easier to be to be more productive and competitive on their global market. When I go from Bosnia to Germany, they always tell me to bring investors because Bosnia has cheap manpower. But I want that the people of Bosnia earn three times more and that they live normal from their earnings. But we cannot be productive if we use technologies from the 60’s.

DW: Does your investing in Bosnia mean that Bosnia offers a chance abroad investors, firstly from Germany in which the head office of your company is?

Muamer Babajić: Bosnia and Herzegovina offers an even bigger chance in the future. To be honest, I don’t think the same way most people think. Most people shift their responsibilities to others. You have to ask yourself first; What can I as a citizen of Bosnia and Herzegovina do for the country and its citizen? It is mandatory to create a positive ambient which will attract abroad investors. A few weeks ago, we had a visit from a German company that is the leader in its market. They we fascinated by our center, which was still under construction, and asked if this really exist in Bosnia. In second place is the mentality. There exist waiters who will not treat you nicely because his earnings are low and he knows that you won’t leave a tip. When abroad investors come to us, and our representatives don’t speak any foreign language and only have their personal interests in mind, then that will drive away those people. My goal is to impress serious foreign investors to come to Bosnia and be happy to invest in it.

DW: You are a young and successful German entrepreneur who with his company wins lots of prizes. What could such an entrepreneur recommend young people in Bosnia?

Muamer Babajić: First of all, they have to show initiative and not wait that some things others do for them. Furthermore, they must not have big desires. Everybody wants to have a nice car, go on vacations, own a house and have huge earnings… But that is not possible (except if you inherit some money or win the lottery) if we don’t engage ourselves to improve the state in our society in which we live in or company we work in. I think that some people need to grow up, because they have more options than they see. But what I am saying is bothersome. It is easier to blame others for our current situation and not take responsibility for what you personally have and have not done.